Unique technology that turns sweat into fuel for bio-batteries

Scientists are studying ways to convert sweat secreted from the human body into a biofuel.

Everyone loves having a smart watch or electronic gadgets that have great features. However, the only thing that causes discomfort when using these electronic devices is the constant need to charge the batteries. The battery life of a device is usually directly proportional to the size of the battery. Obviously, the larger the battery, the heavier it is and the inconvenience. The energy required for smart devices can range from 1 milliwatt for a basic pedometer to tens of milliwatts for more modern timepieces.

Current centimeter batteries are only enough for storing 10 to 300 mAp. That means the battery life for a device after a single charge is up to a few days.

To solve the problem of power sources for wearable devices or wear in the future, researchers at the Sensor Center at the University of California (San Diego city, USA) have found a solution to synthesize the source. bioenergy from the person wearing the device. Wearables that use this energy source can be so small that users forget they exist. Researchers call these "unrecognizable" wearables.

Generate energy from the human body

Synthesis of energy from the human body or related to it is not a new initiative. Since the 1770s, scientists have invented a self-winding watch that uses the natural movement of the body to function. In the early models of mechanical watches, the inner scale functioned the clock to rotate. Later, people devised a magnetic balance axis in the shape of a coin that could store energy to form a battery.

Body temperature is also a factor that scientists used to exploit for energy. In most climates, the human body temperature is always greater than the ambient temperature. Based on this feature, the inventors have created PowerWatch smartwatch that uses the body's own heat to power the device.

However, the above methods still have drawbacks. For example, the plan to generate energy by moving the human body, this solution is not suitable for moving parts such as chest, ears. Or like when the device is in the clothing layer, the thermoelectric and photoelectric options are both ineffective.

That's why scientists turn to sweat for energy. Some chemicals in sweat can be used as fuel for bio-batteries. This type of biofuel battery can power smart devices on the body more than any other method currently available. Scientists at the University of California have developed prototypes of wearables that use the energy generated by sweat. 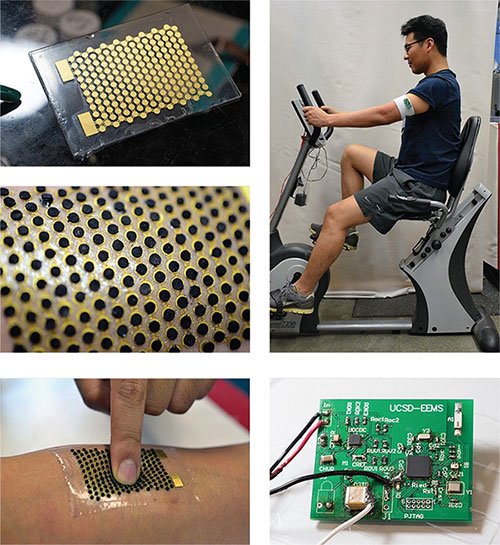 Biofuel batteries that scientists at the University of California tested. (Photo: ELE Times).

How to convert sweat into energy

A battery consists of two electrodes - anode and a cathode - with an electrolyte in between. The fuel enters the anode - where the catalyst splits the molecules into electrons and protons. Protons pass through a membrane to the cathode, while electrons run through an electrical circuit.

The first person to discover this principle was Welsh scientist William Robert in 1839. He used hydrogen as fuel and oxygen as a catalyst to generate water and electricity.

However, hydrogen cannot match the fuel cell in a smart device worn on the body because it is very flammable. Meanwhile, sweat is easily secreted a lot, especially when a person exercises or plays sports. This is also a group of people who often use smart devices worn on people. They represent the first group of customers that companies need to target once a sweat-powered appliance is born.

Sweat is not just water. It contains trace amounts of minerals and other substances such as glucose and lactate. These substances, called metabolites, are a byproduct of chemical processes that are constantly taking place inside living organisms. These substances can create an attractive source of biofuel, especially lactate because its concentration in sweat is proportional to human activity.

To make the bio-batteries, scientists created an enzyme layer that reacts with the lactate in sweat to separate electrons and protons, thereby generating an electric current.

One of the challenges that the science team has to solve is increasing the capacity of bioenergy batteries. In 2017, scientists at the University of California created 3D carbon nanotubes in the form of pellets that can be attached to the anode and cathode peaks. These small pellets increase the surface area of ​​the electrodes without increasing the actual area of ​​the device. From there they allow the electrodes to have more catalysts and to generate more energy.

Aside from the challenge above, a problem posed for scientists is that in most situations people don't sweat constantly, or at least not much enough to generate power except in the case of exercise. sport.

There are three options to overcome the above limitation. One is that scientists only use this mechanism for a few devices targeting certain groups like athletes - who always ensure the required amount of sweat is enough for the device to work. The second is to add an energy storage device to the device. Finally, the scientists take into account the additional power supply.

However, because they do not want to limit the application to a group of objects, scientists have thought of a solution to develop a multi-purpose power source that uses many forms of energy for wearable devices to function.

The user may not always sweat. If their wearable device combines a biofuel cell with a battery with the energy generated by motion or body temperature, more electricity will be generated than using a single source.