Learn the key differences in capacity, performance, and reliability between SSD / flash storage multi-layer multi-layer storage technologies when you load an SSD into your system.

SSDs, also known as NAND flash, are still a hot topic for IT professionals. They are found in flash-arrays, NAS devices, traditional 2.5in hard drives, and PCIe memory cards. Flash SSDs have quickly become the most debatable factor in storage upgrades, but making shopping decisions can be difficult without fully understanding the technologies inside.

One disadvantage of SSD flash drives is that they are still more expensive than HDDs when calculated on a cost-per-gigabyte basis. They generally won't be expensive if measured in terms of throughput like USD / 1GB throughput or USD / IOPS. But capacity is still the criterion, the key "nail" in the IT storage field. Data generation and collection are on an exponential growth curve, from IoT, 5G and AI-machine learning. Storage capacity is a key criterion.

Cost vs. capacity
The flash storage industry's answer to the issues of cost and capacity of flash SSDs has gone in two directions without mutually exclusive. The first is to add the number of bits per cell, also known as a memory cell. Each cell accepts a certain number of bits. Each bit is registered as 1 or 0. Each bit added to the cell exponentially increases the cell size by increasing the number of states a cell can have 2n where "n" is the number of bits in a cell. . SLC is 21 or 2 states; MLC is 22 or 4 states; TLC is 23 or 8 states; QLC is 24 or 16 states; and PLC is 25 or 32 states. The same wafer size produces twice the density of previous bits / cell. That increases capacity while reducing cost per gigabyte.

The second way to increase capacity is to switch from flat or 2D to 3D technology. 3D technology allows NAND cells to be layered. It took a while for NAND manufacturers to master 3D layering; they can now provide 3D NAND Flash chips that typically have 96 layers or more. 3D technology significantly increases SSD flash capacity while reducing cost per GB. It's also important to note that there is currently no 3D SLC chip. 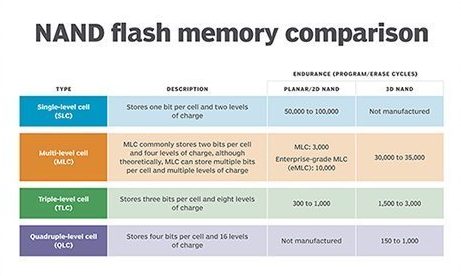 Trade-offs between data errors and performance
More bits per cell significantly negatively affect data read and write errors, performance, reliability, and reliability. Each additional bit per cell takes longer to write to and read from a cell. It requires more voltage to generate and differentiate states within the cell. This is because the additional status values ​​make it more difficult to determine positive values. Additionally, higher temperatures cause more electron leakage in the cells because higher sensitivity is needed to differentiate states. As a result, the operating temperature range gets narrower as the bits per cell increase. This results in a much higher error rate, also known as data corruption.

The real effect is that the flash controller has to incorporate comprehensive error-correction technology with every additional bit. As the number of error correction requests increases, and therefore, the time required to perform data correction with each bit is added. This is the main reason why latency increases and IOPS decreases as the number of bits per cell increases. 3D-layering technology increases IOPS per flash chip with no impact on latency.

More details on NAND flash memory
NAND flash is a destructive memory technology. Every time a cell is overwritten, it must first be deleted. Flash NAND is not a magnetic technology. Deleting it requires a destroyed memory base layer. Reading does not cause any memory wear. Therefore, the general rule for NAND flash is that writing is expensive but reading is free. Writing can take a long time if the erasing occurs. Overprovisioning means that there is a group of previously deleted or new cells waiting for a new write, so the write operation doesn't need to wait. SSD flash continuously monitors program "erase blocks". When data on an erase block is aged because newer versions of that data have been written to other erase blocks, the SSD flash controller performs garbage collection.

Cell durability and general durability of both SSD flash drives are not the same. Two main factors that affect the durability of flash SSDs are the efficiency of the flash controller's wear-balancing algorithm and the total amount of NAND flash in the SSD. Flash capacity rated by SSD does not reflect the total flash capacity in the SSD. There is a substantial spare capacity of NAND flash in the SSD. That redundancy is used to replace worn-out cells. The amount of redundancy for SSD flashes varies. In general, as the number of bits per cell increases, so does the redundancy of the flash SSD. Larger capacity equates to more cells at the level of wear and tear, which increases the endurance of the SSD. 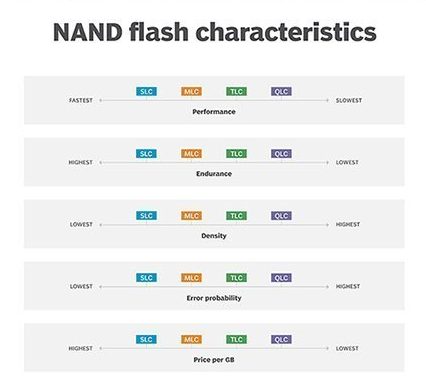 SLC, MLC, TLC and QLC flash come in different performance levels and prices.
Flash SSD durability is generally assessed at terabytes written (TBW). It is also assessed by the number of hard drive writes per day (drive writes per day, DWPD). DWPD translates into TBW. Vendors warrant their hard drive under DWPD or TBW. In short, it's the amount of data that can be written to the SSD flash before it's exhausted. For example, a 1 TB TLC 3D drive is rated and warranted at .66 DWPD will have a rating of approximately 1,200 TBW. Thus there were many entries during that period.

But what if the 1 TB drive is 3D QLC? It will cost much lower, but it is likely to have much lower DWPD and TBW at around 10% or 120 TBW. That number could be increased if the provisioning also increased.

PLC flash SSDs typically have the lowest cost per gigabyte but have serious limitations in terms of durability. Performance will be better than any HDD and significantly lower than any type of flash SSD

If an application needs the best possible performance, SSD flash SLC is the choice. However, the type of storage device that uses SLC is important. A storage array that uses an SLC flash SSD as its cache or as its primary storage medium won't be significantly faster than an array that uses an MLC or TLC SSD. This is due to the congestion of the SSD data path delay, including the SATA or NVMe controller, the storage system controller, the storage network, or whether the system is NVMe-oF between the application server and the storage server, and the application server's data bus. The performance difference in this SSD SLC versus MLC scenario would be difficult to prove financially. In contrast, an SLC PCIe card in an application server or an SLC-based data storage device attached to the network presents a huge performance advantage over comparable MLC products. This SLC example explains more.

Deciding what type of flash storage technology - as well as which device - to use requires trade-offs. Is extra performance necessary? Is capacity more important? What role does cost play in that decision? What about software that can effectively make use of flash technology? Does it consume more application CPU cycles? Note that flash NVMe cards trade higher performance with up to 20% higher CPU resource consumption.

Here are some general SSD rules, but keep in mind that these don't always apply.

When application acceleration performance has to be as high as possible - with the lowest possible latency - and price is not a factor, an NVMe SLC flash SSD is a very good answer. They are not the only answers, as they were just a few years ago. The 3D Xpoint's storage class memory hard drive is up to four times faster at 10 times faster. The data center persistent memory modules run in direct application mode 10 times faster at 10 times cost.
As application acceleration is important, but cost is an issue, MLC, TLC and, to a lesser extent, QLC, are viable alternatives.
When a high-performance shared storage system is required, the storage system architecture is more important than just the media of the flash SSD. NVMe-oF connection over Ethernet, Fiber Channel, Infiniband or TCP / IP; How data is cached or hierarchical is the bigger issue. SLC, MLC, TLC, QLC and PLC are all feasible. Several storage systems on the market, such as the VAST system, have demonstrated this with QLC.
When cost per gigabyte is paramount, performance matters, but not as much and write durability isn't a big factor - due to caching and writing issues - MLC, TLC (and even QLC) have may be the right choice.