360 Total Security has been around since 2014 when it was introduced by Qihoo 360, an Internet security company based in China. Since then, the app has seen stability improvements and now includes more anti-virus, ransomware and anti-malware protection.

Along with a more detailed evaluation of 360 Total Security through the following article offline! 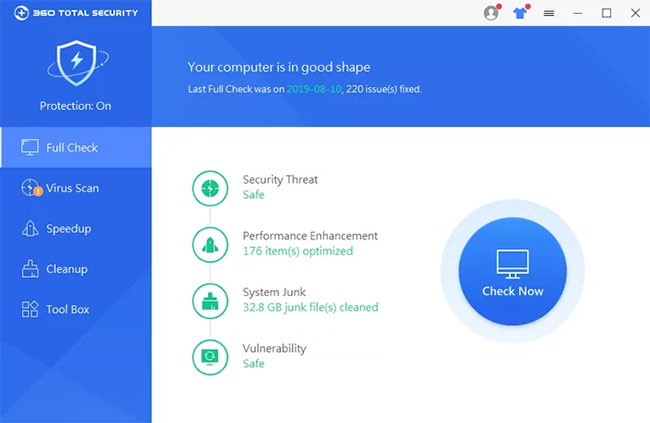 Advantages and disadvantages of 360 Total Security

Definition-based virus scanning is the standard for antivirus applications and 360 Total Security takes these definitions seriously. In addition, 360 Total Security also includes an AI machine learning engine that monitors activity to ensure that threats are captured even before a general definition is established.

By default, 360 Total Security performs a quick system scan (Quick Scan) right after it is installed, even before you finish reading and signing the privacy policy (outlined quite carefully). This scan will check for existing applications on the primary hard drive and only take a few minutes to complete.

However, you are not limited to a quick scan. Full Scan checks system settings, popular apps, running processes, startup items and files to ensure you don't have any existing malware that is likely to cause the problem. with system. You can schedule this (or any other scan) to take place periodically (daily, weekly, etc.) or overnight so as not to affect your system.

You can also perform a custom scan of any connected hard drive or external storage device.

From the moment of installation, through choosing a custom scan and using the additional tools included with 360 Total Security, users will find it a relatively easy to use application. The most used functions are on the app dashboard, which opens when you click the icon on the taskbar. There are a few functions (like many different scanning capabilities) hidden in the options menus, but with a single glance, it's not hard to find any of the features you need.

The application activity on the system (Windows 10 machine) is almost negligible. Fast, full, and custom scans take place in the background while you work with other things and cause no lag or freezes in other apps. Additionally, you will also find that the installation process consumes less system resources. 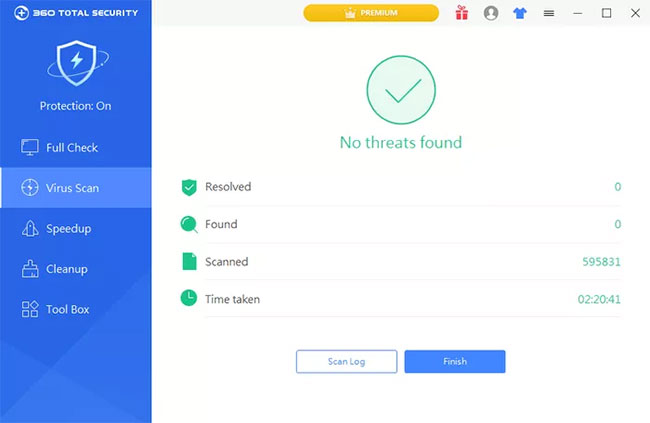 360 Total Security has a very small impact on the system

It's worth noting that there are two free versions of 360 Total Security and each offers a different level of tools.

The more premium plan, though still free, includes everything from the Essentials package, plus the Patch Up patch, which monitors and installs system security patches as they become available, WiFi security checks, apps Use Clean Up and Speed ​​Up. Both Clean Up and Speed ​​Up are utilities that help your computer run more efficiently, and both are extremely useful.

Unfortunately, in testing through AV TEST, 360 Total Security was found to be less effective at removing viruses than other products (only around 91.7%).

360 Total Security also sometimes issues inaccurate warnings, especially with .htm and .html files. This tool flags them as potential security threats, even if they have been saved and you want them saved to your computer.

Another disappointment is the fact that some features, such as a data shredder, driver updater, and firewall, are only included in the premium version.